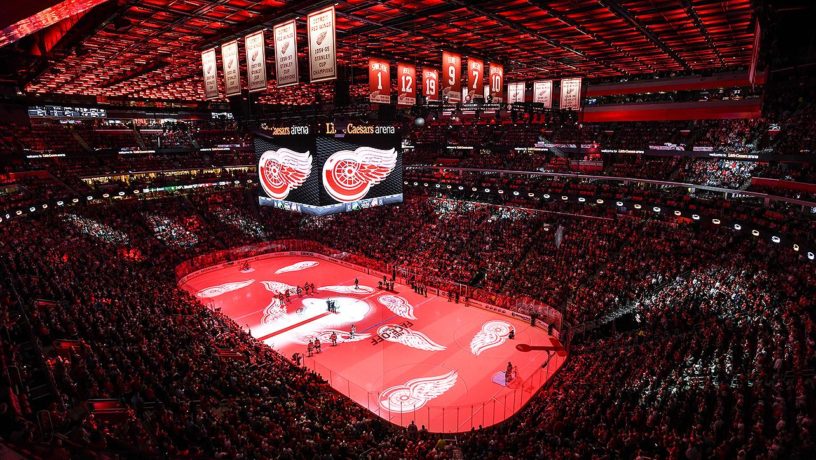 For those of you who do not know, I am originally from Michigan. While I haven’t lived there for twenty or more years the state has always had a fond place in my heart. My extended family still live up there and I occasionally visit. It only makes sense for me to be a Red Wings fan. (If you couldn’t tell by the featured image!) After all, they are the only true hockey team out there…right?

Hockey, along with ice skating and curling, all depend on ice rinks. In the past ice rinks were rather isolated to colder climates due to the limits in technology but now over the years we can now find ice rinks as far south as Texas and Florida. The number of ice rinks have exploded, but what kind of refrigerants are they using today?

Depending on where you go in the world you will most likely find an ice rink using either R-717 (Ammonia) or R-22 (Freon). Here in the United States R-22 is most common and as all of you know it is being phased down and will be phased out in just over a year and a half. (2020 production/imports will stop.) The question now is what will all of these ice rink owners do if they need a repair or maintenance on their systems?

Most of the rinks out there today are older, some even as old as twenty or more years. In the past when a repair was needed they would pay for the parts and then a recharge but now with the rising price of R-22 even the smallest of repair can become a huge burden to the owner rather it be a businessman or a city. A lot of us cringe when trying to quote a homeowner for a few pounds of R-22. Now think about charging a customer for thousands of pounds of R-22. The price is just not feasible in today’s world and even if your customer could afford the recharge whose to say that they might not have a different problem months down the road and have to pay again for another recharge?

The National Hockey League has launched a new initiate known as ‘Greener Rinks.’ The goal with this project is to provide more climate friendly ice rinks across North America. Today there are approximately forty-eight hundred rinks between the United States and Canada. The NHL’s initiative looks to tackle a variety of issues to ensure that their rinks are as climate friendly as possible. Some of these include replacing diesel run ice resurfacers with electric, replacing high intensity lights with LEDs, improvements to ice monitoring to ensure the proper thickness is met, and lastly refrigerants and refrigerant equipment.

It was announced today through a press release that the Chemours company (Formerly DuPont Refrigerants) is partnering with the National Hockey League in their Greener Rinks Initiative. This partnership isn’t just dedicated to the NHL’s arenas but instead to all aspects of hockey rather they be in community ice rinks or in large scale arenas like the Red Wings! The hope is to push these conversions and switches to all aspects of the country, not just to the big cities.

Chemours brings to the table eighty-five years of experience in the refrigerant industry. Some of you may not be as familiar with the Chemours name but I am sure you will recognize DuPont. Chemours is a split off from the original DuPont company and a lot of the same people that were at DuPont migrated over to the new Chemours Company. In fact it was often called the ‘Billion Dollar Startup.’

The goal of this partnership is to provide ice rink owners and cities the education and the possible alternatives to the expensive and dying R-22 refrigerant. When looking for alternatives business owners have a few key features that they are looking at:

Chemours has committed to helping ice rink owners to finding the perfect alternative refrigerant for their needs. There are so many variables that have to be considered before selecting the proper refrigerant. How old is the equipment on sight? What safety standards are required? What performance or energy cost? I could sit here and try to go through everyone of these scenarios but it would serve you better to contact Chemours direct by clicking here. You can then be consulted by an expert who will guide you through exactly what kind of refrigerant you need.

One of the most popular alternative refrigerants to R-22 in ice rinks is the Opteon XP40. (R-449A) The reason for that is that older R-22 systems can be retrofitted over to accept XP40. That means significantly less cost to the business owner. I know if it was me, I would like to extend my current equipment as long as I could instead of having to pay millions for a completely new system.

The XP40 is non Ozone depleting and has a GWP number of one-thousand two-hundred and eighty-two. That’s about five-hundred less then R-22 and four-hundred less then Honeywell’s R-407F HFC. It is non-toxic and non-flammable so safety is not an issue. Along with that the Opteon XP40 is actually more energy efficient then CO2. The savings aganist CO2 is a big deal as that is one of the competing alternative refrigerants for ice rinks. While the popularity of CO2 ice rinks has not taken off yet the technology for Co2 refrigerant systems is evolving rapidly. (It has already been adapted for usages in automobiles in Germany.)

While XP40 checks most of the boxes that we mentioned earlier there is one downside that I want to point out. It’s the high GWP number. While, yes, it is lower then R-22 and other HFC refrigerants out there it is still relatively high. A high GWP number means that the refrigerant very well may be targeted for phase down or phase out.

Chemours’ partnership with the National Hockey League will benefit both companies greatly. Chemours will get their Opteon brand promoted across the NHL and the NHL will move closer to achieving their greener ice rinks initiative.

Converting all of the ice rinks over to climate friendly refrigerants is going to be a large endeavor. In the short term, especially as R-22 rises in price, I could see retrofits dominating the market. It is the ‘easy’ solution. Chemours is in a great position here with their XP40 product. But, as these current units age and eventually get to expensive to repair a new more permanent refrigerant solution will be needed. What will it be? Opteon? Solstice? Ammonia? Carbon Dioxide? Time will tell.