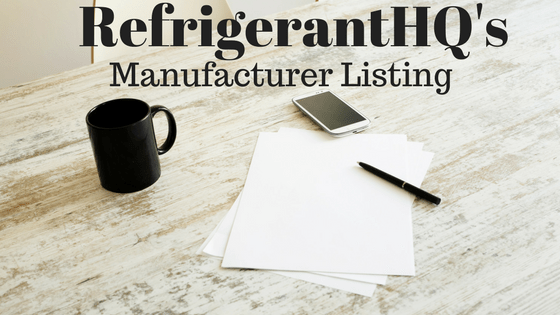 Most of us know and are familiar with the common refrigerant distributors rather it be Hudson, A-Gas, Aspen, Weitron, or whomever else. These names are seen everywhere within the industry and you’re most likely buying from one of them already. That being said, another question that I see quite a bit that isn’t as covered is who are the manufacturers behind these distributors? After all, these distributors have to get their products from somewhere.

What companies are out there and producing refrigerants? Which are the ones that are coming up with new classes of refrigerants or innovating existing refrigerants? A really big market right now, and one that will only be growing over the next few years, is safe and climate friendly alternatives to R-22. With the phase out coming in just a year and half these manufacturers and innovators will be playing a larger and larger role.

Let’s take a look at some of the companies out there manufacturing refrigerants in 2018.

To start this article off I am going to be focusing on the larger refrigerant manufacturers. These are your giant corporations that have a very large percentage of the refrigerant market share. On top of that, these are the companies that you see coming out with new refrigerants or even whole new refrigerant classifications. They have a full research and development department and are always looking for newer and better alternative refrigerants.

Ok folks, so we now have the big guys out of the way. Let’s take a look at some of the up and comers to the market. While these companies may not be as big we have to realize that sometimes that’s a good thing. When a company is small and hungry you can find unusual processes and innovations.

Normally, I wouldn’t include this category in my articles but in today’s world I feel that I would be neglectful if I did not. A good portion of the refrigerants that we use in the Untied States and across the world comes from China. If not the straight refrigerant such as R-22 coming then it’s the blends. A lot of the times you’ll see distributors importing in refrigerants needed in say, R-410A, and then they will mix the imported refrigerants at their facility to come up with the R-410A blend. While there is nothing wrong with this technique there are some companies out there who call this type of refrigerant ‘Domestic Product.’ This label gives the impression that the consumers are purchasing American made product, which in fact they are not.

I’ll be the first to admit that I am not as educated on refrigerant Chinese manufacturers as I should be. Buying from China is a gamble if you don’t know which companies to go through. I did my best below to assemble a list of Chinese refrigerant manufacturers but I do not know which ones are reputable and which ones will provide you with shoddy product. If you are looking for a Chinese manufacturer then take the below names with a grain of salt and be sure to do your research before committing to a large purchase order.

Well folks, that covers it for my list of refrigerant manufacturers. Now I know I must have missed some companies here. In fact, I’m sure of. If you know of a company that was not included on this listing please do not hesitate to reach out to me by clicking here. I will be updating this list based on your feedback.